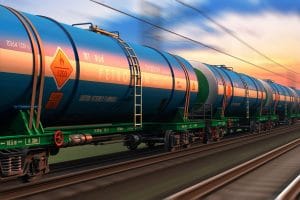 July 6th marks six years since the oil train disaster struck Lac-Mégantic, Quebec killing 47 people and destroying much of the small Canadian village. According to the Desmog blog, a Montreal, Manie & Atlantic (MMA) train, which was full of crude oil from the Bakken oil fields, was parked on a track siding in Nantes, Quebec on July 5th, 2013. The train was left running, unlocked, and unattended, per regulations. The engineer then got in a cab and went to a hotel in the nearby town of Lac- Mégantic for the night.

Overnight, a passerby reported that the train was on fire. The local fire department responded to the fire, and turned off the train’s engine without understanding that the braking system relied on the constant pressure from the engine to keep it engaged. With no more pressure on the brakes, the train began to roll downhill, gathering speed as it headed for the town of Lac-Mégantic, striking a small night club, the Musi-Cafe, which is where the majority of the 47 fatalities occurred. The fire burned for three days.

The train was carrying the crude oil from the Bakken in DOT-111 tanker cars. The U.S. National Transportation Safety Board (NTSB) warned against using these cars to transport flammable liquids because they were known to puncture easily, even at speeds of only 20 mph. The train that came crashing into Lac-Megantic was traveling at least 60 miles per hour, and more than 60 of the 72 tankers derailed, spilling over a million gallons of oil which ignited into a river of fire.

(Five other oil trains carrying Bakken crude oil crashed and burned in 2013. The Associated Press has a timeline of oil train crashes in the U.S. and Canada, which have caused derailments, injuries deaths and property damage.)

This issue is not going away

The Association of American Railroads reports that the boom in domestic oil production, which was largely attributed to increased production in North Dakota, has presented the United States with the opportunity to move closer to energy independence. Railroads have been instrumental in this effort because they have filled the gap between oil production and pipeline capacity.

But the challenge is that oil being shipped by rail is being transported in tanker cars not designed for this purpose, and they are rolling through towns that are unprepared if something like the Lac-Mégantic catastrophe occurs again.

What has changed in oil train safety since the Lac-Mégantic crash in 2013?

You might think that a disaster in which more than 60 oil tanker cars exploded into flames, burned through a small town, and killed 47 people, that the factors which allowed this tragedy to occur have been addressed and remedied.

You would be incorrect.

Desmog reports that despite the calls for U.S. to change regulations to make oil transport safer by using a process called stabilization, which makes it less volatile, the issue has not yet been addressed. In fact:

Until these issues are fixed, there will always be a risk of serious injuries from train accidents. To schedule a free consultation to learn about how our North Dakota injury lawyers can help you, call Larson Law Firm, P.C. in Minot or Bismarck today at 701.484.HURT or complete our contact form.