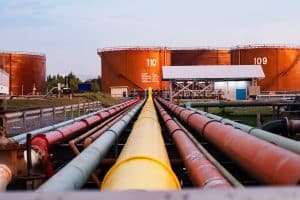 North Dakota has the second largest oil reserve in the country. The oil and gas fields boost the economy of the state and produce jobs for thousands of hard-working people, but oil and gas production can be dangerous, exposing workers to injuries and deaths. Oil production also generates large amounts of industrial waste requiring disposal, including radioactive waste.

Now that a landfill near Williston has been approved to operate as the state’s first, sealed landfill accepting radioactive oil field waste, workers are reminded that along with the more common kinds of accidents and hazards they face, they also need to be aware of potential exposures to radiation.

What kinds of common accidents do oil workers face on the job?

Why are oil and gas workers exposed to radiation?

Naturally radioactive materials occur in the earth. As detailed by the Environmental Protection Agency (EPA) these “Naturally Occurring Radioactive Materials” (NORM) include:

NORM may become concentrated and exposed as a result of manufacturing, mineral extraction, or water processing, or during the processes of extracting oil or gas from soil or rock, at which point NORM are viewed as “technologically enhanced” (TENORM).  According to the EPA, “Wastes generated from oil and gas drilling must be properly managed to keep radionuclides in these wastes from spreading to surrounding areas.”

When are oil workers exposed to TENORM?

TENORM can be found in varying levels in oil and gas production and are present in production waste, such as:

Some areas of the country report concern from inhaled radioactive scaling and other contaminated dust.

How much radioactive waste is produced by oil and gas production in North Dakota?

According to U.S. News and World Report, North Dakota’s oil industry produces roughly 100,000 tons of radioactive oil field waste per year, which previously was not allowed to be disposed of in landfills. Instead, radioactive waste was sent to landfill sites out of state. In June 2022, the North Dakota Department of Environmental Quality gave the operators of the 13-Mile Landfill near Williston permission to accept 25,000 tons of radioactive oil field waste per year, conditioned upon obtaining a $1.125 million bond. The 13-Mile Landfill had been operating as a disposal site for other types of oil production waste. That landfill will now be able to accept radiation contaminated pipe, equipment, and “anything else associated with drilling activity.” The radioactive material must be placed at least 10 feet underground, then sealed with five feet of clay and soil.

The Williston landfill site is only the second site in North Dakota to be approved for radioactive waste disposal. A “slurry well” near Watford City had started processing radioactive waste with saltwater and injecting it 7,500 feet deep the prior year, but that well is unable to accept contaminated equipment.

What can oil and gas workers do to protect themselves from exposure to radiation?

The North Dakota Department of Health oversees health impacts of TENORM exposure in the oil and gas industry. Workers should follow safety precautions and procedures and be knowledgeable about areas where they might be exposed and their levels of exposure. The North Dakota Department of Health recommends the following strategies to reduce external radiation exposure from TENORM:

If you are concerned that you may be suffering an illness or injury due to exposure to radiation as an oil and gas worker, Larson Law Firm P.C. can help. Our attorneys have experience representing injured oil and gas workers and those negligently exposed to toxic substances. We have offices in Minot, Bismarck, and Fargo. Contact us to schedule a free consultation or call us today at 701-484-HURT.