The Five Biggest Recalls from June 2018 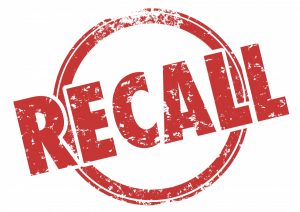 Product recalls happen all the time. Maybe it’s a recall for a minor appliance like your coffeemaker—something insignificant enough that you ignore it, or decide to go out and buy a new coffeemaker. However, when a recall notice arrives for your car, that’s not something you want to ignore. When a recall is announced, it means that your vehicle may have a defect or problem that can put you and your family at great risk.

For those who haven’t been keeping up with the latest recall notices, or just want to double-check on their cars, Cars.com recently published their list of the five biggest recalls from June. If your vehicle is on here, it’s crucial you follow any instructions for repair or replacement to avoid any car accidents or injuries.

Following are the five largest recalls of June.

If you were injured in a car accident related to a defective part or another person’s negligence, the North Dakota injury lawyers at Larson Law Firm, P.C. can help. We will investigate the details of your case and find out who, or what, was responsible, and help you seek compensation. To schedule your free initial consultation with an attorney, call our Minot office at 701-484-4878, or fill out our contact form.