The Most Common Causes of Burn Injuries in the Home 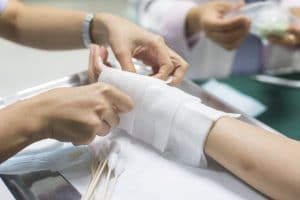 The American Burn Association has published statistics that indicate some 486,000 people in the U.S. obtained emergency medical help for burn injuries between 2011 and 2015. A large majority of burns treated in burn injury centers – 73% – occur at home, with 8% occurring on-the-job.

People of all ages fall victim to burn injuries of various types every day, including flame or fire injuries, electrical injuries, scalding injuries, and chemical burns. The four most common types of burns experienced by individuals in the home are electrical, chemical, radiological, and thermal.

It is important for electrical burn victims to get checked by a doctor as soon as possible after the injury, particularly because of the damage potentially done inside of the body.

Certain household items such as gasoline, bleach, drain cleaner, chlorine, and paint thinner can cause chemical burns. These burns are often the result of handling chemicals such as these improperly. These burns are generally not alleviated until the agent causing the burns is deactivated.

Another type of burn is the thermal burn. This type of burn can because by several different reasons, including fires, explosions, contacts with hot surfaces, and scalds from hot liquids or steam. At home, it is always important to exhibit great caution around items such as ovens and ranges, hot oil, boiling water, flammable liquids, and fires.

The most common type of radiation burn is, believe it or not, sunburn. Radiation burns can also occur as a result of a malfunctioning microwave that does not shut off when the door is opened. The dangers of radiation burns include the damage done to cells that may also become cancerous.

Radiation burns can also be caused by tanning beds, and some cancer patients may develop radiation burns during their treatment. First or second degree burns can occur depending on the radiation intensity and time of exposure. In some cases, enough exposure to radiation can turn the skin to black.

At Larson Law Firm, P.C., we are here to fight for your rights to compensation if you have suffered an injury, including a burn injury, in any type of accident. We represent injured clients in North Dakota with strong and intelligent advocacy from start to finish. Give us a call today at 701-484-4878 or send us a message through our contact form to set up a free consultation at our office in Minot or Bismarck.